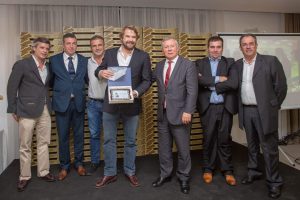 On december 6th, at the 20th Rocha Pear Ceremony hosted by ANP Pera Rocha, triPortugal, of which O Melro is founding member, was awarded the Bigest Rocha Pear Exporter in 2016/2017 and 2017/2018 prize. This recognition is the result of a longtime hard work of a dedicated team and we couldn’t be prouder! At the same ceremony, Francisco Fêo e Torres, from O Melro admnistration, was also recognized for his work on behalf of Rocha pear in the past years.